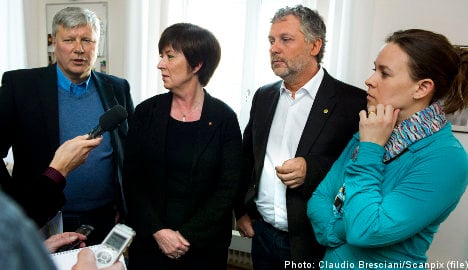 “That is my answer on behalf of the red-greens,” Social Democratic leader Mona Sahlin said during a radio interview, to which Left Party leader Lars Ohly replied, “No, there is no agreement.”

It is the only decent and fair thing to do, said Sahlin.

“The injustice is as big as the gap,” she said during Sveriges Radio’s P1 party leader interview when asked why the party wants to invest 17.5 billion kronor ($2.35 billion) in tax reductions for pensioners to the same level as wage earners in the next mandate period.

Ohly said that there is no agreement on the tax reduction without increasing taxes for workers. Sahlin said the red-green deal would still apply after 2012.

Ohly said the gap could be cut if wage earners paid higher taxes. He believes it could happen without raising taxes, but it would be irresponsible to rule out tax hikes.

“The most important thing for me is not to raise taxes, but to ensure that there are sufficient resources to improve the quality of welfare,” he said.

Sahlin said the opposition is putting big money at stake to strengthen the social security system and increasing benefits when pressed about cutting taxes for wealthy pensioners, but not early retirees.

All gaps would eventually be eliminated, even those between wage earners and early retirees, she said, adding that the Social Democrats want to remove the system of tax deductions for household services (RUT) and invest more in tax deductions for services performed on the home (ROT).

She has also not excluded the possibility of a proposal on a reduced VAT because the service sector is an important and growing industry for new jobs.

Separately, Sahlin pledged to strengthen demands on the quality of schools. She would be prepared to legislate on the number of teachers in relation to the proportion of pupils.

She also wants to see stronger laws on schools, especially those relating to different quality demands, than what is currently in place.

“Preferably, we will not be talking about profit or not without mentioning whether schools are being operated with quality,” she said.