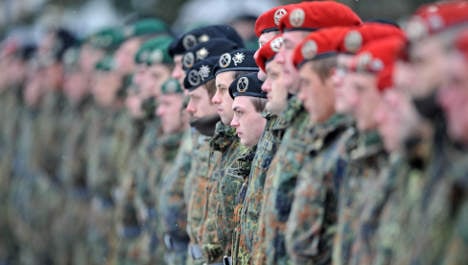 “We cannot afford to allow ourselves to push this discussion to the background any longer,” he said, adding that he would be meeting colleagues to discuss his plans on Monday.

He will present them with five different possible models for the reform of the armed forces, and tell them what he wants to do – stop conscription and reduce troop numbers from around 250,000 to around 165,000.

He would not talk about how much money this might save, although acknowledged that the reduction in costs of €8.3 billion by 2014 as prescribed by the cabinet was still valid.

Guttenberg faces strong political opposition to his plans – from his own Christian Social Union and other conservative ranks. Many are furious about the proposal to scrap compulsory military service and have already made their intention to fight his plans clear.

He seems to have the unspoken support of Chancellor Merkel, who Der Spiegel news magazine said this weekend is trying to get her Christian Democratic Union behind the idea – but will not state her position publicly before being sure of her party’s position.

The magazine suggested that the measures Guttenberg has outlined would only save €1.5 billion by 2014.

The CSU and CDU are set to discuss military reform during their annual conferences in autumn.