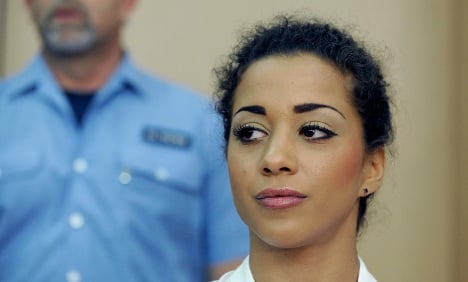 Benaissa, 28, faces charges of dangerous bodily harm for having intercourse on at least five occasions with three partners between 2000 and 2004 without informing them she had the virus that causes AIDS, despite knowing about it since 1999.

But her 38-year-old former boyfriend told the Darmstadt court she had been “open and responsible” about her HIV status during their relationship in 2003 and 2004.

The Frankfurt musician said he also had the impression that during that time she had suffered immense pressure with the secret that was kept separate from her public image.

But when Judge Dennis Wacker asked the witness whether Benaissa could have had a liaison with the Frankfurt stage manager who claims she infected him with HIV in early 2004 through unprotected sex, he said: “That could be.”

The plaintiff’s lawyer interpreted that statement to mean Benaissa likely chose to inform one partner and not the other during the same time period.

“Apparently Ms. Benaissa made a choice between who she would tell and who she wouldn’t,” the stage manager’s lawyer Hans-Dieter Henkel told the court. “I don’t understand the logic of this.”

If convicted, Benaissa faces up to 10 years in prison, but as the second day of proceedings ended Henkel said he expects the court will hand Benaissa a suspended sentence. A prison sentence would not serve his client either, he added.

Benaissa, who has admitted to being addicted to crack cocaine at age 14, discovered her HIV status when she became pregnant at 16 in 1999. The case is taking place in a youth court because she was still underage during the incidents in question.

Meanwhile Benaissa’s three No Angels bandmates are unlikely to testify in the case.

State prosecutor Peter Liesenfeld, along with Henkel and Benaissa’s lawyer all believe that Sandy Mölling, Jessica Wahls und Lucy Diakovska no longer need to vouch for their friend because her statements have been credible.