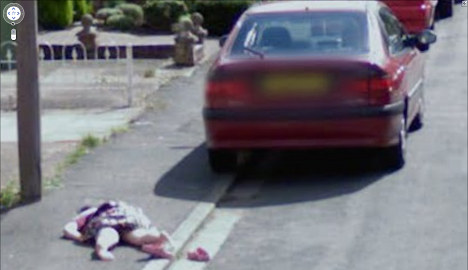 A British girl pretending to be dead was caught on Street View. Photo: DPA

The heated debate about Google’s Street View in Germany has already claimed its first victim: the justified criticism of online services offering panorama street-level photos. There are good arguments against launching Google’s program in its current form, but they are in danger of being lost in a wave of hysteria.

Nothing nefarious has happened yet. Millions of pictures of German houses have taken by Google’s special cars, and they have been stored on the US internet giant’s servers. But now these pictures are to go online – and the outcry has been overwhelming.

Amid all the classic German angst, good arguments against Street View have been mixed with downright silly ones. The pro-Google camp gleefully quotes its opponent’s most absurd comments and stands by the under-fire web company. But that doesn’t change that Google really has done a lot wrong.

The company sent out cars to film the streets from a height of 2.9 metres. This is high – ask someone to sit on your shoulders and this is about the view they would have. Then ask them to tell you whether they can see over walls and hedges.

In many parts of Germany, such barriers are restricted to a height of two metres – often lower. Is there a clearer sign that you would prefer that people didn’t see into your property than by building a wall as tall as allowed by the law? I don’t believe there is.

Of course, Germany is not the only country that has a problem with Street View. The project was criticised in Switzerland and Greece, among other places, and in 2009 Google was forced to re-photography 20 Japanese towns from a lower angle.

Politicians want Google to obscure car licence plates and people. But what do they mean by obscuring people? So far, Google has only suggested obscuring faces. You don’t have to be a criminologist to know that people can be recognised by many other features than their face. If you’ve seen how poorly Google has tried to make people unrecognisable in other countries you’ll know that their standard is unacceptable.

And then there is the issue of objecting to service entirely. Google, in line with the tradition among US companies, sees raising objections as a service. But this highlights something of a culture clash between America and Germany – the right to opt out should not simply be an act of good will on the part of a company.

Google only makes use of public space, which is fair enough. But in most cases the use of this space is subject to certain conditions, and it is these that the government must now finally make clear. It has had many years to do this, but apparently this has never been deemed necessary before.

But it will take more than a national legal framework in Germany to deal with this issue. A large number of Google’s servers are situated outside the European Union. Even if the relevant laws were introduced Europe-wide, and data protection commissioners wanted to take action against, for example, the poor attempts to make people anonymous, whom exactly would they sue?

German Street View is not operated by Google Germany, located in Hamburg, but by the parent company sitting in the United States. If the company really did care about German data protection standards, then they would move those operations here, making them legally accountable.

We lack a sensible legal framework and an agreement that ensures that European data protection standards can be maintained even if companies process and keep EU-based data abroad.

In theory, such an agreement has existed for nearly ten years. It is called the International Safe Harbour Privacy Principles. But in practice it is worthless, and what is wrong with it can’t be mended on a domestic level.

So that leaves us with the users. What should they do? Should they chase down all these services, raise objections and keep a legal account of it all? Or should they agree a flat-rate fee with their lawyers? Current German law unfortunately doesn’t even allow such things.

All we can do is hope that those participating in the current debate don’t lose their sense of perspective, and that they see the launch of Street View – which remains inoffensive barring further changes – as an opportunity to demand some rather more fundamental changes.

Falk Lüke is a consumer rights expert for the Federation of German Consumer Organisations, which operates the website Surfer Haben Rechte. This commentary originally appeared in German at Zeit Online. Translation by The Local.