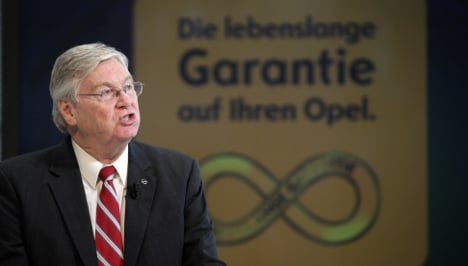 In a development that could turn the offer into a PR disaster for General Motors struggling German division, the watchdog has taken issue with the fact that the guarantee contains a raft of caveats, not least that it runs out after 160,000 kilometres.

The Centre for Protection against Unfair Competition (WBZ), which keeps an eye on companies’ compliance with advertising and marketing laws, has sent the firm a warning notice stating it is making false promises in its advertising.

The WBZ has threatened Opel with legal action if it does not withdraw the campaign within two days and sign a “cease and desist” declaration.

“We are taking issue here with a misleading, attention-grabbing promotion. In contrast to the major announcement, a ‘lifetime’ guarantee from Opel is not actually ensured,” said WBZ board member Rainer Münker.

“A lie in an attention-grabbing statement cannot be ‘explained’ or ‘moderated’ by an explanation with an asterisk,” he said.

Opel promised to consider the warning letter from the watchdog. “The guarantee offer from Opel has achieved an outstanding response from our customers,” a spokesman said.

Opel boss Nick Reilly announced the guarantee earlier this month, saying at the time he wanted to strengthening “trust in our products.”

Once the car changes hands, the guarantee ends unless the the new owner pays a three figure sum per year.

Opel has struggled ever since the world fell into the financial crisis in 2008. From January through July this year, Opel sold 131,364 vehicles – down 40 percent from the same period last year, when the so-called “cash for clunker” scheme encouraged many people to buy a new car.

Limited predominately to Europe, GM’s Opel/Vauxhall unit has not been able to profit from surging demand for cars in China and North America, making its share of its home market that much more crucial.

Svend the Viking does not want to ruin his braids. Photo: &Co

The council’s new advert, “Helmet has always been a good idea”, brings together two somewhat incongruous aspects of Danish life — the country’s love of cycling and its Viking past, using humour to show up some of the silly reasons people give themselves not to wear cycle helmets.

The advert starts with the imposing Viking chief Svend rousing his men for their next invasion of England. To rhythmic chanting and the blowing of horns, he mounts his steed, brandishing his thick and heavy sword.

Then, suddenly, his young son comes running bearing his helmet. Svend ignores him, and utters a cry: “To the ships!”.

After a pause, one of his men nervously asks: “shouldn’t you have a helmet on, Svend?”.

“No, it’s annoying and it makes my scalp itch,” Svend responds sheepishly.

“What do I do when I get there? Run around in a silly helmet?” he adds.

Then he roars, “It ruins my braids!”

It’s only when his wife comes out that he finally dons his gleaming headpiece and with the cheers of his fellow marauders all around him makes his way to the longships.

Then the slogan — “A helmet has been a good idea for all time” — appears on the screen in rune-like writing.