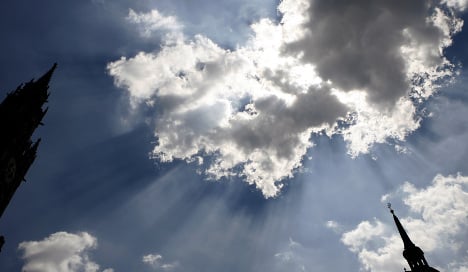 DWD meteorologist Robert Scholz said in a statement that, after days of cloud and rain that might have tempted pessimists to think summer was over, hope has finally emerged that conditions will improve towards the weekend.

Most of Germany will remain cloudy on Tuesday, with rain and even storms likely in western and central regions, and high temperatures of between 18 and 23 degrees, Scholz said.

Overnight it will remain mostly dry in the south with cloud cover breaking up in some parts. Otherwise it will remain cloudy with showers and thunderstorms in the north. It might even be a night to pull out the duvet, with low temperatures to sink to between 11 and 16 degrees.

On Wednesday the fitful weather will continue, with thick cloud cover and showers in much of the country, though southeast Bavaria has a chance of seeing some sunshine. High temperatures will range from 18 to 24 degrees. The south will feel gentle breezes, tending to brisk wind further north and some strong gusts in coastal and mountain areas.

Showers will continue in the north overnight, including some storms, while the Alpine regions will also see isolated storms. The rest of the country will see some cloudy heavens though also some Byronesque starry skies and cloudless climes.

Once again, the night will turn chilly, with lows of between 11 and 16.

Blue skies will continue to break through the grey on Thursday, especially in southern and central regions of the country. But in the north, heavier clouds and showers will still prevail. Temperatures will range from about 20 degrees on the coast to 26 degrees in the southwest.

Temperatures overnight will range between a dry 10 degrees to 17 degrees in most of the country.

By Friday, the north will join the south in experiencing clearer, milder weather, with rain unlikely. Temperatures in the south will reach a more seasonal 28 degrees, compared with highs of 19 to 25 degrees in the north.