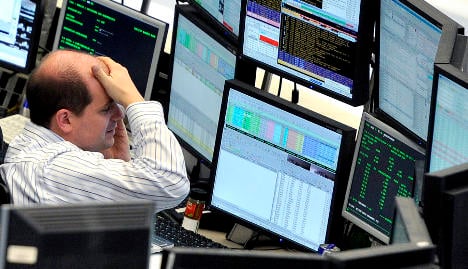 “The decrease … indicates that the enormous growth observed in the second quarter is unlikely to continue,” the ZEW institute said, with weakening conditions abroad likely to hit exports, Germany’s main growth driver.

The ZEW’s monthly sentiment indicator, based on a survey of 284 analysts and institutional investors, fell 7.2 points to 14.0 points, below the indicator’s historical average of 27.3 points and a much sharper drop than feared.

Last week, data showed that German gross domestic product (GDP) surged in the second quarter at its fastest rate since reunification 20 years ago, with output soaring 2.2 percent compared to the previous three-month period.

This followed figures showing that exports, the backbone of the German economy, rocketed 28.5 percent year-on-year in June to reach €86.5 billion, close to pre-crisis levels.

But Germany appears to be in a league of its own amid increasing signs elsewhere, not least the United States and China, that the rebound seen in recent months may be running out of steam.

The US Federal Reserve warned last week that the recovery in the United States, the world’s biggest economy, would be “more modest” than expected, sending financial markets tumbling worldwide.

“Given that economic growth worldwide is losing momentum, the euphoria about the growth rates in some industries is making financial market experts feel uneasy,” ZEW chief Wolfgang Franz said in a statement.

Jennifer McKeown, European expert at Capital Economics, said the fall in the index would “dent hopes that the strong recovery seen in the second quarter could continue.

“(As) global demand growth slows further and consumers remain reluctant to spend, the recovery is likely to be fairly short-lived,” she said.