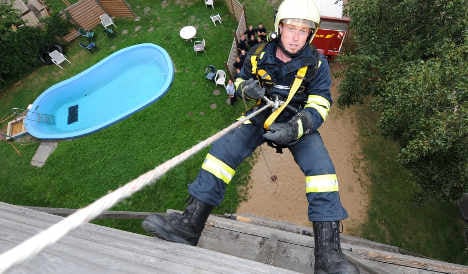 A survey conducted for the WirtschaftsWoche magazine showed 66% of the free positions did not attract qualified applicants, while in 26% of cases nobody at all applied.

“The lack of labour is developing into a dangerous brake on growth, particularly for small and medium-sized companies,” said Marie-Christine Ostermann, chairwoman of the employers’ association Young Businesses-BJU, which co-commissioned the survey.

Eight percent of the 450 businesses questioned for the poll said they had declined contracts during the first half of 2010 because they did not have enough staff to take on the extra work.

Ostermann said a growing lack of engineers, information technology experts and scientists could only be reversed by companies looking abroad for workers.

She called for the work permit rules to be changed so that highly qualified workers from outside the European Union can work in Germany more easily – specifically reducing the minimum wage they have to attract from the current level of €65,000 to €40,000 a year.

Those in the trades are also looking abroad to fill gaps in their personnel, the Wirtschaftswoche reported, with those companies particularly in the east of the country bringing in young workers from Poland and the Czech Republic.

They are being offered training places, said Otto Kentzler, president of the central association of German Trades, ZDH.

He said the Cottbus trades guild is offering a guaranteed training place to foreigners who first complete a German language course.

Kentzler called for an image campaign to make the idea of coming to Germany to train and work more appealing to young people from other countries.

“Germany has to create a clear picture of itself in the world, it must become more interesting for young people, as a destination for study and training,” he said.

Yet another survey this weekend showed widespread opposition to the idea of highly-qualified foreigners coming to work in Germany.

Particularly those from the east of the country, older people and those who said they were supporters of the socialist Left party were against such influx of workers.

Of those in the east, 61 percent said they opposed the idea, while only 52 percent from the west were against it. Of those aged between 14 and 29, 42 percent did not want to see qualified foreigners coming here to work, while 60 percent of those over 50 were against.

When broken down according to political affiliation, those who said they voted for The Left were most strongly against foreigners coming here to work, with 64 percent opposed, although those who voted for the conservative Christian Democrats, were not far behind with 60 percent against.

The number of Germans without work is expected to dip below three million this autumn, said Dieter Hundt, president of the employers’ association at the weekend.

“I am very optimistic that unemployment will go under the three-million-mark in the autumn. We are experiencing a surprisingly strong upswing, it is booming in many sectors,” he told the Hamburger Abendblatt newspaper on Saturday.