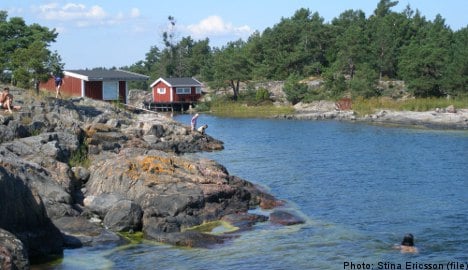 The rugged landscape around the coastal town of Västervik in south-eastern Sweden means it should be crawling with climbers. But the area remains tantalizingly undiscovered.

"There are many rock climbing facilities in Västervik, but not all of them are developed and they are very hard for tourists to find," said Christoffer Olsson of the Västervik Tourist Office. "Our goal is to help tourists find them and make them more accessible."

"The climbing tourists who come now are not organised," he added. "They might contact the climbing club, but they are not really bringing in any revenue. This is one way to get them into our hotel and hostels, get them access to climbing guides. We want to make climbing more organised and professional in Västervik."

GRANIT is an EU-sponsored project on which the Västervik Tourist Office, Västervik Climbing Club and a number of companies in the hospitality industry will work together to make Västervik Sweden's natural rock climbing destination.

Kustlandet is a region in southeastern Sweden designated by the European Agricultural Fund for Rural Development along the coast encompassing Mönsterås, Oskarshamn, Västervik, Valdemarsvik, Söderköping and Norrköping.

In July, the Östergötland County Administrative Board decided to approve the the EU Leader project's application with 1.75 million kronor ($239,375) in funding.

The aim of the project is to expand potential business opportunities for companies connected to the hospitality industry through rock climbing and bouldering.

While rock climbing includes using one's hands and feet to ascend a steep object, bouldering involves mounting boulders or small outcrops, often with climbing shoes and a chalk bag or bucket. Instead of using a safety rope from above, a crash pad and a human spotter, who directs a falling climber onto the pad, are used in bouldering.

Companies that work with accommodation, food and activities will be involved in packaging rock climbing adventures that will then be sold primarily through the Internet.

Currently, the 500 climbing tourists the area hosts every year is expected to increase to 5,000 during the project period of three years. GRANIT hopes to make climbing in Västervik more accessible to climbers primarily from Sweden, but also from around the world.

Presently, rock climbing tourists who come to Västervik hope they can get in touch with a local climber when they arrive. One of the project's main goals is to make it more professional so that it is easier for international tourists to get to climbing spots, which are currently difficult to access, said Olsson.

The project includes putting up signs at selected climbing locations, replacing old bolts, arranging parking and clearing brush. Information on the mountains and boulder regions have already been collected and will be posted on a joint web portal.

A survey funded by Kustlandet Leader and conducted by Jim Wasmuth and Stefan Rasmussen of the Västervik Climbing Club became the starting point for the project. Wasmuth is also active in the Swedish Climbing Federation (Svenska klätterförbundet) and will be employed as the climbing project manager starting in September.

"We knew from experience that we had very good climbing opportunities in Västervik," said Wasmuth. "During the survey, we found no fewer than 51 facilities for climbing and bouldering. When we talked to the tourist office, they were hooked on the idea to make something more of the opportunities that we saw and the project grew from there."

The federation, founded in 1973, has over 6,000 members across the country belonging to more than 60 regional clubs. As Wasmuth put it, "Climbing is a big part of my life and I see great potential in Västervik as a climbing destination. I am very pleased to be working with the project in the coming years."

Västervik Tourist Office is the project owner for GRANIT.

"We saw the potential in attracting this narrow target audience that is relatively easy to reach through Internet marketing and come here during the times when we otherwise have low occupancy rates at our accommodation facilities," said Stina Porsgaard, Västervik's tourism director.

"At the same time, climbing is an interesting product that we believe is relatively underdeveloped in Sweden," she added. "We are very pleased to receive a positive decision from the county administrative board so that we can now go ahead and take the first step towards becoming a climbing destination to consider in Sweden."