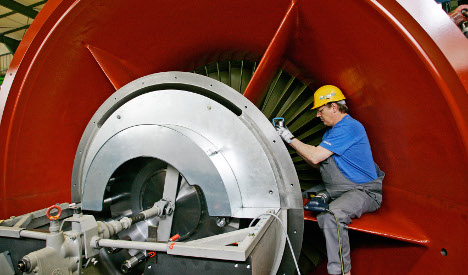 “This has improved (the) chances of the German economy having grown more rapidly in the second quarter than previously assumed,” Commerzbank analyst Simon Junker said.

Germany, the world’s second biggest exporter after China, suffered its worst post-war recession last year but has bounced back as growing economies snap up German goods.

On the imports side, the picture was even stronger – good for Germany and its European trading partners whose economies benefit in the German slipstream.

Imports soared 31.7 percent to €72.4 billion, the Destatis statistics office said, the all-time record since figures were first compiled in 1950. For the first half of 2010, the trade surplus jumped 26 percent from the same period a year earlier to €74.6 billion, Destatis said.

“We’re seeing Germany doing better than the others right now but to some extent this is also because it did worse than the others in 2009,” Deutsche Bank senior European economist Gilles Moec told AFP.

Since then, exports have picked up markedly, in particular to Asia which puts a high value on German machine tools, autos and chemicals.

“Exports are doing so well that they are helping to produce more jobs and more wages in Europe and this in turn is producing more domestic demand,” Moec said.

Berlin has been criticised by France and others for not boosting domestic consumption and relying on exports for economic growth but Moec pointed out that household savings rates in Germany were actually lower than in France, Italy or Spain.

“This debate really needs to stop,” the French economist said.

Chancellor Angela Merkel has been dubbed “Madame Non” by some for her perceived reluctance to spend heavily on promoting domestic consumption but that is not an accurate picture.

“Germany is the only European country which is actually adding to the stimulus in 2010,” Moec countered.

Germany’s diversified industrial supplier base means exports often have parts sourced from companies in central or eastern Europe, and also in Spain, he noted.

“If Germany does well, this seems to have a very nice second-round effect on Spanish exports,” Moec said.

Europe’s economy should thus again get support from Germany before a forecast slowdown later this year.

In the meantime, manufacturers have well-stocked order books and their contribution to European growth will be welcome.

European Central Bank president Jean-Claude Trichet said on Thursday that second- and third-quarter figures “are likely to be better than we had anticipated.

“We are now … in a situation which is obviously better than before,” he said before quickly adding: “I don’t declare victory, we remain cautious.”