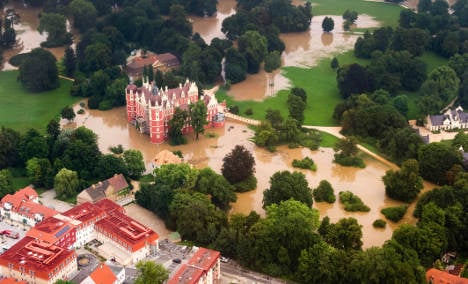 The flooded city of Ostritz in Saxony. Photo: DPA

The Saxon town of Bad Muskau was hit by flooding from the Neisse River, covering the main square and the UNESCO-protected historic Fürst Pückler Park.

“The park is completely flooded,” said Bad Muskau Mayor Andreas Bänder, adding that the water had remained under the high level mark of 1981.

Still, townspeople did all they could to protect their historic treasures and the Fürst Pückler palace had been secured with sandbags.

Rail firm Bombardier in Bautzen had to stop production as water 1.5 metres high flooded into the factory, causing millions in euros in damages.

Meanwhile the neighbouring state of Brandenburg awaited the floods after the water began rising overnight. The authorities were expecting to announce a state of emergency before the end of Monday.

“We consider the situation critical, but evacuations are not currently necessary,” he said.

Flash floods near the German-Polish-Czech border triangle killed at least nine people over the weekend after a Neiße dam broke in Poland. Within three hours water levels rose by four metres in the Görlitz area, where more than 1,000 people were evacuated on Saturday. The cities of Rothenburg, Bad Muskau and Zodel were all badly affected. Electricity, water and train were also cut off in some areas.

But on Sunday night water levels began to recede, and some residents in the region were allowed to return home, the LHWZ authority said.

The flooding left major damages behind, but costs have yet to be estimated.