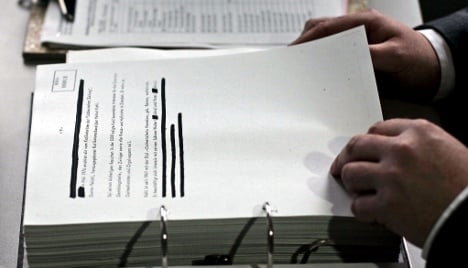 Reiner Deutschmann, an MP for the pro-business Free Democrats and member of the Bundestag’s culture and media committee, told Friday’s edition of the Mitteldeutsche Zeitung that the ruling coalition would put forward a bill after parliament’s summer break to extend the law allowing the background checks.

At present, the law is due to run out in 2011. Deutschmann said the amendment bill would also broaden the types of jobs subject to such checks.

Under the existing law, only candidates for top public service positions and elected office can be probed to see if they ever worked as officers or informants for the feared East German secret police. But under the extension, middle managers and officials such as honorary mayors could also face the checks.

The FDP politician said that eventually the centre-right majority in the Bundestag also planned to set up an investigation to find out which members of the parliament were Stasi workers in the communist East German regime between 1949 and 1990, and what if any decisions may have been influenced by those MPs.

The FDP’s parliamentary leader, Jörg van Essen, confirmed Friday: “We are sticking to the scheme. I don’t want people to be able to accuse us of failing to deal with the reconciliation with the past.”

The plan was slammed by politicians from the socialist Left party, which was originally formed from a merger of former East German communists and disgruntled western German trade unionists. Its parliamentary leader in Thuringia, Bodo Ramelow, told Mitteldeutsche Zeitung the background checks were a “placebo history” that had nothing to do with elucidating the past.

The party’s Saxony-Anhalt state chairman Matthias Höhn told the paper: “Twenty-one years after the change, it is time to end the checks.”