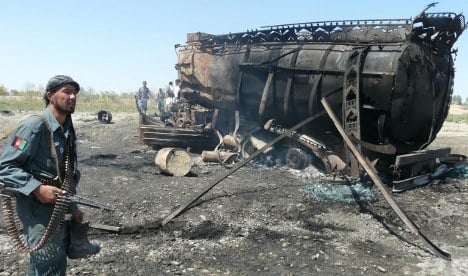 Announcing the payments, a Defence Ministry statement hastily pointed out the money was not a legal obligation but a “support payment.”

The payments of $5,000 (€3,800) were intended to provide practical help to the relatives of those who died, and seriously injured survivors – a total of 102 victims – he said. They would be made this month.

According to news magazine Stern, special accounts will be set up in Kunduz to receive the payments.

“We want to avoid having the money fall into the wrong hands,” Bundeswehr commander in Kunduz, Reinhardt Zudrop, told the magazine.

On September 4 last year, US aircraft, on the orders of German Col. Georg Klein, bombed two petrol tankers that had been hijacked by the Taliban. Although the tankers had become bogged in a dry river bed, Klein deemed them to be a threat to the nearby German camp.

After initially claiming only Taliban fighters were killed, the German government later admitted scores of civilians were also killed. After an investigation in which the Bundeswehr co-operated with the Afghanistan Independent Human Rights Commission, it was concluded that 91 civilians were killed and 11 seriously injured.

The Defence Ministry spokesman said the size of the payment corresponded to the “type and fashion typical for the country.”

Payments of the same amount were given to the families of the five Afghan soldiers killed by the Bundeswehr in a “friendly fire” incident on Good Friday.