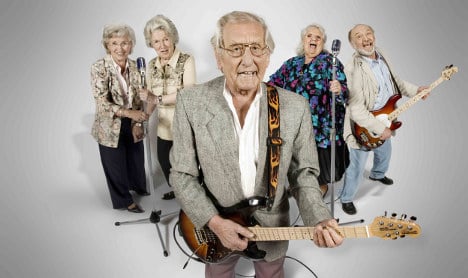 A group of 25 singers recruited from retirement homes across Germany are discovering the joys of rock music – including recording a studio album, making a video and performing at the Veltins-Arena in the city of Gelsenkirchen in North Rhine-Westphalia.

Their story is being told in a television documentary, “Rock Not Retirement – The Best Comes Last,” which began Tuesday this week on private broadcaster Sat1.

They are being led by Berlin choral conductor Carsten Gerlitz and accompanied by the German rock band “Pur” which had a string of number one hits between 1995 and 2005.

The choir was brought together via notices put up in retirement homes. The Australian rock band AC/DC’s classic thumping rock tune, ”Highway to Hell,” was the first song the choir learned, though they had trouble with the English-language lyrics, daily Süddeutsche Zeitung reported.

However, the paper noted with a cynical turn that the documentary appeared to be manipulating the emotional response of the audience to the elderly. The nursing home shots use static camera work and reduced colour contrast to create a sad, dull atmosphere, Süddeutsche Zeitung wrote in a review of the first episode.

The shots of the choir rehearsing, by comparison, used dynamic camera work and heightened colours.