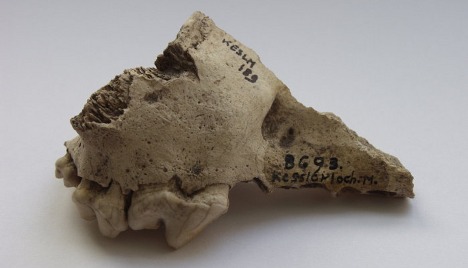 The fossils were among a haul of archaeological finds uncovered in 1873 in the Kesslerloch cave in northern Switzerland, Swiss news agency ATS said Monday. But it was only last year that researchers at Germany’s Tübingen University took a closer look at them, it said.

“During a recent re-analysis of the faunal remains, we identified a cranial fragment and teeth of the domestic dog,” the researchers said in an article in the International Journal of Osteoarchaeology.

“We argue that the maxilla fragment must now be considered the earliest indisputable directly dated evidence of a domestic dog,” they said.

Belgian archaeologists have claimed to have found the cranium of a dog dating back 30,000 years, but researcher Hannes Napierala told ATS: “We are sceptical because the teeth are very similar to those of a wolf.”

The fragment found in the cave in Switzerland’s Schaffhausen canton, however, was clearly distinct from remains of wolves, the scientists said.