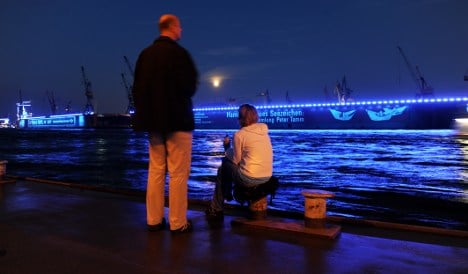 Hamburg is putting on its second Cruise Days festival, which will “heave to” on Friday night and culminate on Saturday when one of the world’s biggest antique sail boats joins the cruise liners on the water.

The Hanseatic city has already turned blue: lighting artist Michael Batz has shone blue on the bridges, docks and Churches around the harbour all this week in preparation for the festival.

Click here for photos of the Hamburg Cruise Days.

During the 2006 football World Cup, Batz created “Blue Goals” – football goals made out of blue fluorescent lights erected on 175 of the city’s buildings. For the last Cruise Days in 2008, he pulled blue-flaming bands through the harbour.

“An atmosphere is created which brings to mind the old connection between the harbour as the bread-giver and the city’s residents,” Batz said. “Blue is the colour of all colours – regarded on the one hand as peaceful, yet physically very suspenseful.”

Countless sailing boats and six great cruise liners –the Deutschland, the Astor, Mein Schiff, two ships from the Aida cruise liner firm and the Columbus – will be flashing their broadsides.

Some 500,000 spectators are expected to turn out to the main festival at 9:30 pm on Saturday night, when the cruise liners will be joined by antique ships including the legendary windjammer, the Sedov, which for nearly 80 years was regarded as the world’s largest traditional sailing ship.

For those who can’t make it to Hamburg for the weekend, the city is offering the Hafenradar, an internet site where maritime fans can closely follow the movement of the various ships, as well as getting detailed breakdowns on the ships’ specifications.

On Friday, the 163-metre-long Eclipse, the world’s biggest superyacht, which is owned by Russian billionaire Roman Abramovich, was also in the harbour.