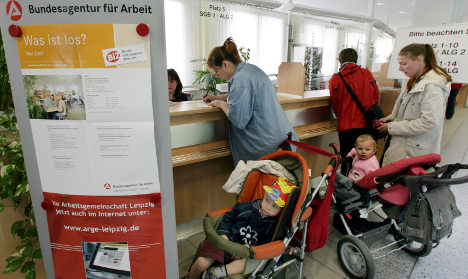 Mothers with their children at the employment centre. Photo: DPA

The Microcensus 2009, released by the Federal Statistics Office, found that 19 percent of families with children aged under 18 had only one parent. In 1996, the figure was 14 percent – or about one in seven.

The total number of single-parent families rose over the same period by 20 percent, from 1.3 million to 1.6 million.

Yet at the same time, there are fewer families overall today than in times past. While there were 9.4 million families with children under 18 in 1996, there were just 8.2 million last year.

The figures are worrying because single parent families are more likely to live in poverty than those with both a mother and father. In 2009, some 31 percent of single-mother families lived on incomes of less than €1,100 per month – with mothers of children younger than three-years-old especially hard hit.

Some 62 percent had incomes of between €1,100 and €2,600 per month. For 31 percent of single mothers, welfare such as Hartz IV unemployment benefits was the main source of income.

A separate report from the Federal Statistics Office, titled “Life in Europe,” found that in 2008, nearly one in five single-parent families could not afford to properly heat their homes. Nearly three quarters said they were not in a position to pay unexpected bills such as a broken washing machine. More than half said they could not afford a one-week holiday requiring travel once a year.