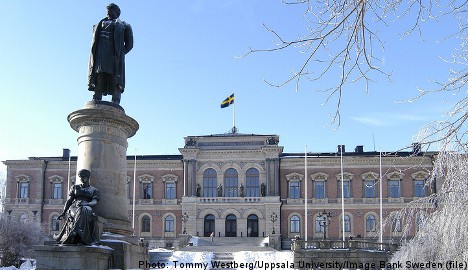 The new rules have been criticized for penalising foreign and older applicants, said Higher Education and Research Minister Tobias Krantz.

“The core of the reform remains the same,” Krantz told Sveriges Radio’s Ekot news bulletin. “What we are doing now is opening up to discuss how it should look like on the fringe of reform.”

He added, “We get to be honest and say that we could not foresee all of the consequences. We will appoint a new commission to go through this properly.”

Critics allege that applicants with foreign qualifications are placed in their own selection group. Places are allocated to a percentage of applicants in each group, resulting in a small risk of the foreign group not securing any spots in higher education.

This may violate EU law and the Nordic agreement, which ensures treating all candidates equally.

Criticism is also directed towards the new admission qualification points system, which “rewards” those who take more math and language courses in senior secondary school, which applies to younger candidates.

Applicants who have qualifications the previous senior secondary school system in Sweden, or those born in 1983 and earlier, cannot earn more points this way.

“We are of course open to discuss the time limits,” Krantz told news agency TT.

He defended the points system, saying the purpose is to encourage more high school students to pursue advanced math and language courses, emphasising their importance. However, how the points can be combined with equal treatment of all applicants remains to be seen.

The National Agency for Higher Education (Högskoleverket) pointed out that it would require an enormous effort to compare the levels of senior secondary school mathematics across different countries.

The Social Democrats have pledged to drop the new admission criteria if they are elected in the autumn election.

The strike led by the Snuipp-FSU union, the largest among primary school teachers, comes after the latest of several changes on testing and isolation requirements for potential Covid cases announced by Prime Minister Jean Castex late Monday.

After seeing long lines of parents outside pharmacies and labs in recent days to test children in classes where a case was detected, Castex said home tests could now be used to determine if a student could return to school.

But teachers say class disruptions have become unmanageable with the spread of the highly contagious Omicron coronavirus variant.

“Students cannot learn properly because attendance varies wildly, and a hybrid of in-house and distance learning is impossible to put in place,” the Snuipp-FSU said, adding that absent teachers are not being replaced.

It is also demanding the government provide facemasks for staff, including the more protective FFP2 masks, and CO2 monitors to check if classrooms are sufficiently ventilated.

“Not only does the current protocol not protect students, staff or their families, it has completely disorganised schools,” the union said, claiming that classes have effectively been turned into “daycare centres.”

Education Minister Jean-Michel Blanquer has said the government is doing everything possible to avoid outright school closures that could cause havoc for parents and jeopardise learning for thousands, especially those in low-income families.

“I know there is a lot of fatigue, of anxiety… but you don’t go on strike against a virus,” Blanquer told BFM television on Tuesday.

As of Monday some 10,000 classes had been shut nationwide because of Covid cases, representing around two percent of all primary school classes, Blanquer said.