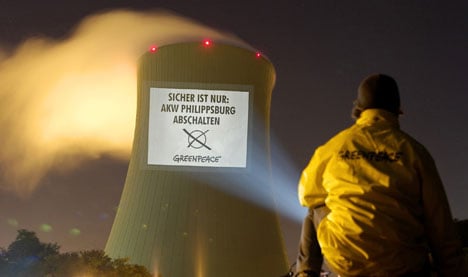 A Greenpeace protest at the power station in 2009. Photo: DPA

Under plans approved by the southwestern state’s Environment Ministry, the Philippsburg power station could be shrouded in thick mist in 40 seconds if an aircraft was hijacked in the area.

A spokeswoman for the ministry said that a new scheme, which sees the fog grenades fired from special launchers set up around the reactor, was running “decently” at another nuclear power station.

A recent ruling by Germany’s top court that hijacked aircraft could not be shot down also gave some impetus to the scheme, the spokeswoman added.

The plans have been criticised, however, as being insufficient since a plane’s navigation system could easily direct a pilot to the power station without the need to see it with the naked eye.

Germany decided in 2000 to mothball its 17 nuclear power stations by 2020, but Chancellor Angela Merkel’s new coalition government wants to extend the life of some reactors, which produce around 30 percent of the country’s power.

However, nuclear power is unpopular among Germans worried about safety risks and the lack of a permanent storage site for radioactive waste.