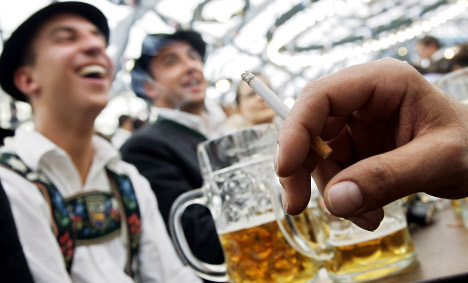 “That’s what the people decided and we’ll now comply with it,” said spokesman Toni Roiderer on Sunday.

Voters in Bavaria backed a total smoking ban in a referendum held two weeks ago, however, city officials in Munich managed to secure Oktoberfest organisers a one-year reprieve, since there would be little time to alter the festival’s iconic beer tents to accommodate smokers.

But now the tent proprietors are hoping to use this year’s Oktoberfest, which is celebrating its 200th anniversary, as a test run before the ban is strictly enforced in 2011. Many are hoping to convince city officials there is no need for expensive smoking areas and extra exits with more personnel.

Munich’s Abendzeitung reported over the weekend that such measures could end up costing hundreds of thousands of euros.

“Up until 5 pm on Friday the smoking ban won’t be a problem,” Wiggerl Hagn from Löwenbräu tent told the paper. But weekend evenings would prove the true test, he said.

New signs at tent entrances will be set up to alert potential smokers, who will also receive a warning from wait staff. “If all else fails we can stop serving guests beer,” said Hagn. “But we’re not going to rip off anyone’s arm.”

Hippodrom proprietor Sepp Krätz told the Abendzeitung expected most people would willingly comply with the new ban. “But we don’t know how people will react,” he said. “No-one will get thrown out by me!”

After this year’s Oktoberfest, all the tent proprietors plan to come together to discuss options for the future, such as temporary shelters for smokers.

Organisers of Oktoberfest announced last week that the legendary beer festival will go back to its roots for its 200th anniversary this autumn. Alongside the copious amounts of beer and traditional food, the event this year will offer several historical attractions to mark two centuries of epic partying.