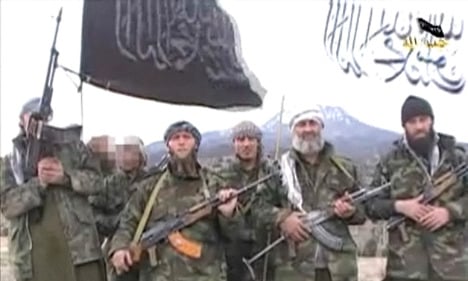 A file photo of a group of German Islamists in Pakistan. Photo: DPA

Participants and their family or friends can now find help via email or telephone with the new “HATIF” service, which stands for Heraus Aus Terrorismus und Islamistischem Fanatismus, or “Leaving terrorism and Islamist fanaticism.”

“Hatif” is also the Arabic word for telephone.

“The main goal of HATIF is to prevent violence in the name of Islam,“ the intelligence agency the Verfassungsschutz said.

The service, offered in both Turkish and Arabic, will not try to lead people from the religion of Islam, but instead provide safe options for those hoping to extract themselves from extremist circles, the agency said.

Experts believe that danger to those looking to turn away from Islamist extremists is extremely high. According to de Maizière, Islamists continue to keep Germany in their sights, with more than 29 such organisations active within the country.

Germany began a similar programme for right-wing extremists in 2001.