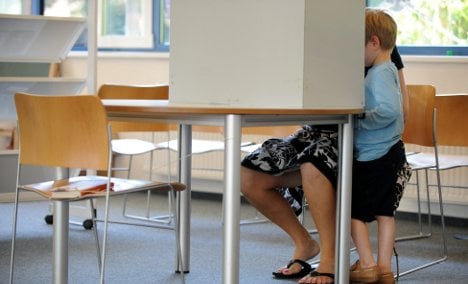 Some 39 percent of the city-state’s voters took part in the referendum, with a clear majority against the proposal to make the city’s common primary schools last from four to six years. A total of 276,304 Hamburgers were against the plan, while just 218,065 approved.

The defeat in the city’s first referendum means an end to an important part of the coalition’s education platform.

School reform opponent and founder of the initiative Wir wollen lernen, or “We want to learn,” Walter Scheuerl said he was happy with the result.

“It makes us a bit proud that today we drew such a clear result,” he said Sunday. “We not only beat the parliament, but we were victorious despite the major PR machinery that the parties, unions and city government started against us on the costs of taxpayers.”

“Today has been a pretty crappy day,” she said, also referring to Beust’s resignation, which was announced before the final votes were counted.

In a joint statement, Goetsch and the outgoing mayor, who cited personal reasons for his resignation rather than the referendum, called the defeat “bitter.”

“We are very disappointed that we couldn’t convince enough people about the primary schools,” they said, adding that they had failed to make the breakthrough that would have allowed students to learn together for longer before being sent into different educational tracks.

The vote means that Hamburg’s school system reform plan, put in place after the Second World War, will remain the same. This dictates that next year there will be only two types of schools – city district schools and university-preparatory schools called Gymnasium starting with the fourth grade.