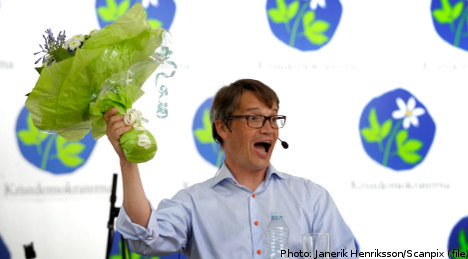 Furthermore Stockholm Pride is in two weeks set to be the scene of the first party leader debate since the summer recess and the Christian Democrats and Hägglund will not be represented.

According to Hägglund’s press secretary, Petra Kjellarson, Hägglund will instead be holding his traditional speech on Öland the day after the debate and is thus unable to attend.

An explanation which did not appease debate organisers, RFSL.

“Of course he would have time, it is not a direct clash with the summer speech, but he obviously does not prioritise this,” said RFSL head Ulrika Westerlund to the newspaper.

The last time the Swedish Federation for Lesbian, Gay, Bisexual and Transgender Rights (RFSL) hosted a party leader debate, during the 2006 election year, Hägglund was in attendance but not then prime minister Göran Persson.

Persson was widely criticised for his absence, while Hägglund was roundly booed by the Pride crowd and SvD asked Westerlund if this could have had an impact on his decision.

“It would be a shame if that was the case. They forward policies that many LGBT people are critical of. While KD argue that they are a party for all this debate is a prime opportunity to show that,” she told the newspaper.

RFSL stood out an empty chair in Göran Persson’s place at the 2006 debate and plans to do the same for Göran Hägglund.

Due to its rapid growth in popularity in recent years, the Pride festival will this year be located at the Maritime Museum with the Pride House located in Kulturhuset on Sergels Torg. The event will take place from July 26th to August 1st.