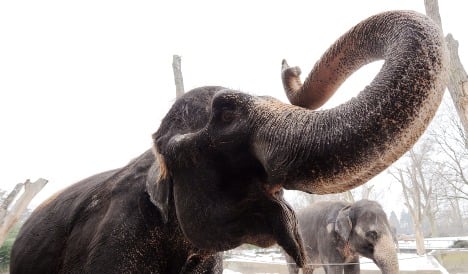 The extraordinary long-living pachyderm collapsed suddenly and subsequently fell into a ditch within its enclosure, officials at the zoo said.

“We are very sad but we are glad that Vilja did not suffer,” said Wilhelma director Dieter Jauch.

A wrinkly and clever lady, the Indian elephant was long a crowd favourite. She arrived in Stuttgart in 1952 and was the first mammal at the zoo.

Visitors are said to have seen Vilja collapse on Saturday when her front legs suddenly gave way and she fell.

Zookeeper Volker Scholl said that there had been no signs of any illness or particular weakness in the days before her death.

He said she had naturally aged and slowed down, but lately she was very fit and active. On Saturday morning, she plastered herself abundantly with cooling mud.

Thought to be an impressive 61, nobody knows exactly when Vilja was born. She came to Stuttgart in 1952 and was the first mammal at the Wilhelma. Workers at the zoo back then estimated her to be at least three years old, making her the oldest elephant in Europe.