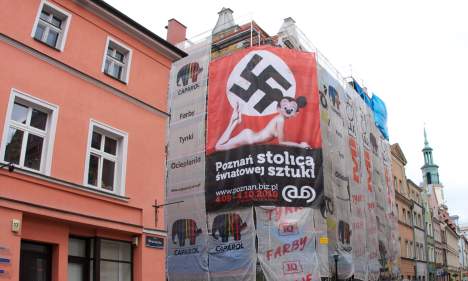 The poster at the gallery reads 'Poznan is the world capital of art.' Photo: DPA

A new art gallery is using the work titled “NaziSexyMouse” by Italian artist Max Papeschi to advertise an exhibition, but a city councillor has tried to take legal action, saying it violates a law banning the display of Nazi symbols.

Vandals have also ripped a gaping hole in the two-storey high poster, forcing the gallery to put up a new one.

“For Poles, the swastika symbolises the suffering and death of more than six million Poles,” said councillor Norbert Napieraj.

“Exhibiting this symbol in the city centre is a particularly disgraceful and disgusting act.”

Six million Polish citizens, half of them Jewish, died under Nazi Germany’s occupation of their country during World War II.

But the public prosecutor’s spokeswoman Malgorzata Mikos-Fita told AFP on Friday that no legal action would be taken against the gallery for publicly displaying the poster as “it did not break the law.”

Gallery curator Maria Czarnecka said that “we don’t have to remove it as it’s a work of art. If it were just a swastika, it would be propagating Nazi symbols. The law allows such symbols to be used in academic and artistic contexts.”