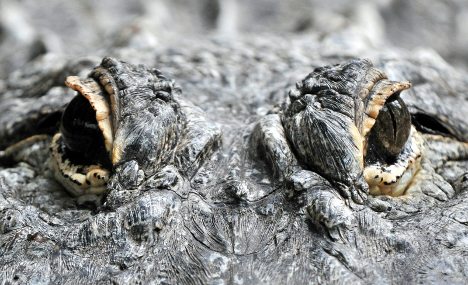 Many people in the state of North Rhine-Westphalia are asking whether the recent sightings were just a product of summer boredom, or could actually mean that scaly reptiles are lurking in the waters of the Ruhr River.

The Bochum officials are hurriedly attempt to rule out the possibility after an aquatic beast was reported on two separate occasions near a river island.

Police and a number of residents have been out searching for a glimpse, but their efforts have so far been fruitless.

“Even the anglers are keeping an eye out,” police spokesman Volker Schütte said on

Over the weekend three children and two teenagers reported seeing two crocodiles, a claim that stood up to police questioning. Their statements were convincing, Schütte said.

One of the animals was allegedly about 1.8-metres long and lying on the island, while another had headed towards a group of swimmers before disappearing.

Despite the believable reports, Schütte said he wouldn’t rule out the possibility that it was a story typical to the “silly season,” or Sommerloch in German, when the summer news cycle slows considerably during the holidays and odd stories become more prevalent.

Bochum police have dubbed the creatures Ruhri I and Ruhri II after the river.

One Bochum veterinarian reported that the city has had frequent problems with Caimans and exotic snakes abandoned by overwhelmed owners, a fate which usually leads to their death.

Reptile rescue centres across the country are overwhelmed with such animals, she said.

Meanwhile last week Hessian police actually secured a one-metre crocodile on the loose in Groß-Rohrheim, though it turned out to be a circus fugitive.

Bochum’s last crocodile sighting was in April, when several residents reported a similar animal in the Kemnader See.

Police spokesman Schütte revealed he was looking forward to a break from the hysteria when he goes on holiday to Florida this summer.

“There I’ll at least get to see a real crocodile,” he said, referring to plans to visit the Everglades National Park, known for its wetland wildlife.