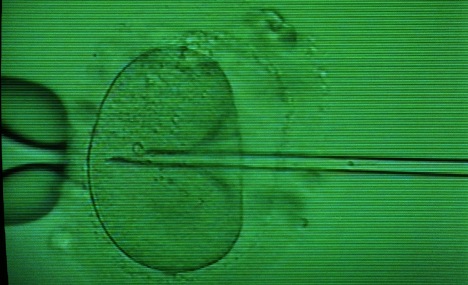 Doctor Matthias B. used “pre-implantation diagnostics” to choose healthy embryos for implantation in three cases in which the couple undergoing IVF had a risk of hereditary diseases. The at-risk embryos were then discarded.

Despite critics’ fears that the practice opened the door to “designer babies,” Judge Clemens Basdorf said the diagnostic technique had nothing to do with selecting qualities for a child according to the parents’ wishes.

Germany’s embryo protection law stipulates jail sentences of up to three years for anyone who uses an embryo “generated outside the body” for “a purpose not aimed at its preservation.”

But Basdorf said there was no evidence that pre-implantation diagnostics was associated with an acute danger to the embryo. It was not possible, under the present law, to find a doctor criminally culpable for using the diagnostic technique on embryos.

“Criminal liability because of abusive use of reproductive techniques does not come into consideration,” Basdorf said.

It was up to lawmakers to prohibit pre-implantation diagnostics if they believed that was the right course, he said.

Pre-implantation diagnostics could be used by several hundred affected couples a year if legal certainty to perform the procedure were given by a court, experts estimate.

Defending the diagnostic technique, Jan-Steffen Krüssel, chairman of the German Society for Reproductive Medicine, said it was no different to testing for hereditary illnesses during pregnancy. Tests to detect illnesses in an embryo in the womb are permitted in Germany, and a termination is then allowed in the case of a genetic condition such as Down Syndrome.