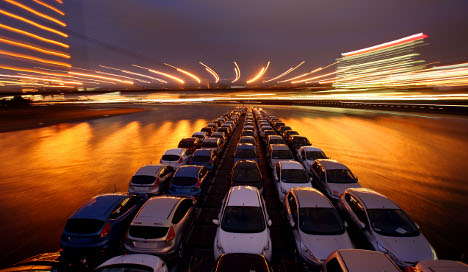 The draft budget bill, set to be discussed in cabinet on Wednesday, said the lesson from the debt crisis in Greece was that countries must slash budgets in order to emerge from the crisis.

“The recent developments in Greece and other euro countries are a clear sign that public budgets must not be strained endlessly,” says the draft. Germany “has a role model function within the euro zone with regards to budget consolidation,” the bill added.

German Chancellor Angela Merkel’s coalition government is aiming to cut at least €80 billion from public spending by 2014, including more than €11 billion next year. It has also passed a “debt brake” law that binds Berlin to a balanced budget by 2016.

Leaders from the world’s top 20 economies agreed at a G20 summit in Toronto last month to halve budget deficits by 2013 and put long-term deficits on a sustainable path by 2016.

Helped by an unexpectedly strong economic upturn, the deficit in Europe’s top economy Germany will amount to about €65 billion this year compared to a previous estimate of €80 billion. Next year the deficit will be €57.5 billion, nearly €20 billion less than feared, according to figures in the draft budget.

“Overall, this is a timely chink of light with respect to fiscal woes,” said Padhraic Garvey from ING bank.

Germany is not the only European economic powerhouse striving to tackle its deficit problem. On Sunday, Britain’s coalition government ordered ministries to plan for cuts of up to 40 percent, the latest step in laying the ground for a spending review in October that is expected to be the toughest since World War II.

After its worst economic slump in more than 60 years, with output shrinking by 4.9 percent, Germany’s economic fortunes have turned around swiftly, driven primarily by exports. Berlin has projected growth of 1.4 percent this year, a forecast that is too pessimistic according to many experts.

Berlin’s hair-shirt approach to saving has not been without its critics, with Washington in particular warning that countries should not throttle a recovery with such harsh austerity measures. But Economy Minister Rainer Brüderle insisted that far from hindering growth, fiscal consolidation would in fact foster economic development.

“For me, the recovery of our economy is the top priority. But we will only achieve the required growth if we make our economy fit for the future,” Brüderle told Handelsblatt.