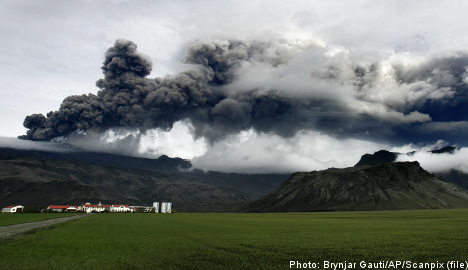 The eruption of the Eyjafjallajökull volcano in southern Iceland caused widespread disruption across much of Europe and in April and May, with over 11 percent of Swedes affected in some way. More than 70 percent of those affected experienced economic consequences of some form or another, the survey shows.

Stockholmers were overrepresented in the statistics, with more than 17 percent of the city’s residents reporting that they were affected.

The least affected were residents of northern central Sweden in Värmland, Dalarna and Gävleborg, of which 5 percent said they had problems. The survey shows that it was mainly young Swedes aged 15 to 22, or 14 percent, who were affected.

The most common extra expenditures, in order of importance, are food and drink at 30 percent, alternative travel arrangements at 19 percent and accommodation at 15 percent, wrote Visa Sweden in a statement.

Swedes prefer to pay for these added costs with plastic. Over 40 percent paid with cards: 25 percent by debit and 15 percent by credit. Only 13 percent paid in cash and traveler’s cheques appear to be history soon, with a mere one percent usage. Five per cent stated that they borrowed money to pay.

“Given that there are so many face trip cancellations while on holiday, the time when one wants the least amount of fuss with money and hassles, it is encouraging that more Swedes choose cards over cash – a far more flexible and secure means of payment,” said Fredrik Westerman, head of Visa Europe in the Nordic and Baltic countries, in a statement.

The web-based survey was carried out by Cinta (Snabbasvar.se) last month with 1,174 Swedish respondents. The survey excluded business trips.