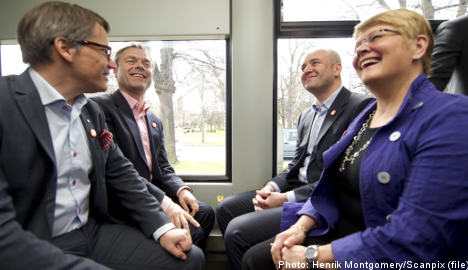 The poll shows that the four centre-right parties have the backing of 46.9 percent of respondents compared with 45.8 percent for the Social Democrat, Left and Green Parties.

The Alliance currently leads by 1.1 percentage points in the Sentio June poll. In the survey conducted in May, the difference was similar, but the advantage then went to the opposition. All changes in the June poll are within the statistical margin of error.

In addition, the poll reveals greater support for the Moderates than the Social Democrats, one percentage point ahead at 31.8 percent compared with 30.8 percent.

Support for both the Green and Left Parties declined to 9.3 percent and 5.7 percent respectively. The Liberal Party remained unchanged at 5.6 percent, while the Centre Party increased slightly to 5 percent.

All parliamentary parties meet the minimum threshold of four percent to sit in Sweden’s parliament, the Riksdag, although the Christian Democrats are dangerously close to the limit at 4.5 percent.

Support for the nationalist Sweden Democrats increased slightly to 5.7 percent, matching the Left Party, while the proportion of undecided voters remains high at 21.5 percent.

The poll is based on interviews with 2,969 respondents on the internet and by telephone in June.