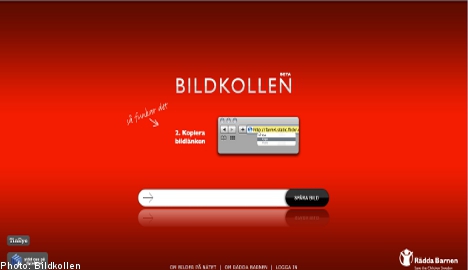 The new Swedish website Bildkollen (“Image Check”), which is backed by Rädda Barnen, the Swedish arm of Save the Children, can help you can track down where your photos have ended up on the web.

The website, which goes live this week, helps users track images by entering the URL on the website. Once loaded onto the server, it compares the photo with all the others that are in the database and also makes it possible to subscribe to updates for a specific image that you want to keep an eye on.

Bildkollen is linked to an image search engine called TinEye. TinEye hosts over 1.5 billion images and the database is updated continuously when images are posted online. The service can identify whether the image is cropped or is the original version.

Popular sites where users post pictures include Facebook, Bilddagboken, Fotosidan and Flickr. Images that are posted on blogs, for example, can be stolen by anyone, often without the creator’s knowledge.

“A photo can spread very quickly across the internet,” Norström said.

“We want to have a debate about network security and attract the attention of young people about the risks associated with uploading pictures of oneself,” said Norström.

The site also offers advice on what to do if one finds pictures of oneself in an inappropriate context.

The administrative court in Stockholm ruled that the decision of the Swedish telecoms authority, PTS, to ban the use of equipment from Chinese companies Huawei and ZTE in a new Swedish 5G telecom network last October — a move that irked Beijing — was legal.

Equipment already installed must also be removed by January 1st, 2025.

“Sweden’s security is an important reason and the administrative court has considered that it’s only the security police and the military that together have a full picture when it comes to the security situation and threats against Sweden,” judge Ulrika Melin said in a statement.

Huawei denounced the ruling, but did not say whether it would appeal.

“We are of course noting that there has been no evidence of any wrongdoings by Huawei which is being used as basis for this verdict, it is purely based on assumption,” Kenneth Fredriksen, the company’s vice-president for Central, Eastern Europe and the Nordic region, told AFP.

Huawei will now evaluate the decision and the “see what kind of actions we will take to protect our rights,” Fredriksen added.

After the UK in the summer of 2020, Sweden became the second country in Europe and the first in the EU to explicitly ban Huawei from almost all of the network infrastructure needed to run its 5G network.

Beijing had warned that PTS’ decision could have “consequences” for the Scandinavian country’s companies in China, prompting Swedish telecom giant and Huawei competitor Ericsson to worry about retaliation.

“We will continue to be available to have constructive dialogues with Swedish authorities to see if we can find pragmatic ways of taking care of security and at the same time keeping an open and fair market like Sweden has always been,” Fredriksen said.