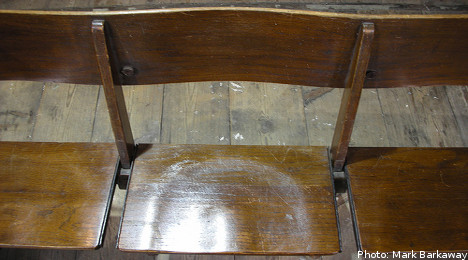 As part of a larger renovation of the 12th century parish church the pews were being prepared for a new coat of paint to cover flecks that that had long been presumed to have come from aerial ablutions of the bats lurking in the church eaves.

But on closer inspection the spots were in fact found to be traces of paint used to brush up the pews in the 1930s and as such form part of the building’s cultural heritage, along with the 12th century murals adorning the walls.

The flecks of pre-war paint have stubbornly clung to the pews in the old church for the past 80 years despite several previous attempts to scrub them off.

Parishioners had become uncomfortable sitting in the brown-speckled pews and had forwarded a request to the church authorities that the benches be cleaned during the renovation.

However, the county administrative board refused after the offending spots were examined more closely by a curator. According to the expert, the bats are not to blame and has declared that the pews are to be left alone.

“That the bats would have managed to dot every pew would have been pretty incredible,” said church clerk Lilli-Ann Grindsiö to the newspaper.

However, Grindsiö is not herself entirely convinced that the flecks are mere paint, calling the find “a mystery that we will probably never know the answer to.”