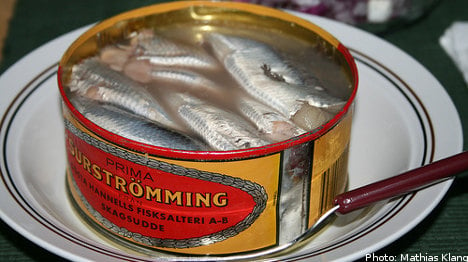 Sweden and Finland have a special exemption under European Union rules to sell fatty fish from the Baltic sea, which have dioxin levels that are too high to be sold elsewhere.

Surströmming, or fermented Baltic herring, falls under the exemption but it is only valid until the end of 2011, leading Erlandsson to plead the case with visiting EU commissioner John Dalli.

“He informed the commissioner about the importance of surstroemming for our cultural heritage in Sweden and how important it is that we continue to produce it,” Erlandsson’s spokeswoman Sofia Jöngren told AFP.

Asked whether Dalli had tried the traditional delicacy known for its pungent odour, Erlandsson replied, according to the Swedish TT news agency: “His colleague recommended him not to do it.”

Surströmming is a dish best served cold and is popular in some parts of northern Sweden. It is sold in bulging cans due to the continued fermentation and when opened gives off a pungent smell.

The delicacy is regularly a bone of contention among urban neighbours and is thus usual reserved for consumption in the open air and typically as a crisp bread sandwich buried under heaps of sour cream, onion and potatoes in order to disguise the acquired taste.