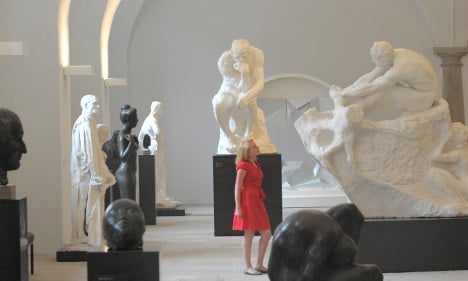 On Sunday, the first visitors arrived at the museum to view the updated structure, which now includes a watertight “ark for art,” designed by Berlin firm Staab Architekten, that hovers some 17 metres above the inner courtyard in case of another flood.

The €51.2-million project was celebrated by the state of Saxony’s premier Stanislaw Tillich, who called it “one of Europe’s most modern museums.”

“The Albertinum makes the art metropolis of Dresden complete once again,” he added.

The collection includes Romantic-era art all the way through contemporary works, in addition to an impressive sculpture gallery featuring works beginning with French sculptor Auguste Rodin.

It would be a “great misunderstanding” to believe that Dresden was “only a city of the Baroque,” Tillich said.

Director of the Dresden State Art Collections Martin Roth went on to thank the group of more than 40 artists who began the initiative to restore the museum after the flood by auctioning off some of their most treasured works to raise some €3.4 million.

The building is a “symbol for cooperation and solidarity as well as for the future,” Roth said.

Meanwhile glass-front workshops and storerooms allow visitors to witness the internal activities of the museum.

The original building was built between 1559 and 1563 as an arsenal but was re-purposed as a neo-Renaissance museum to house the city’s sculpture collection between 1884 and 1887. At the time it was named after the reigning monarch, King Albert of Saxony.

The Albertinum sustained fewer damages during the Allied bombing of 1945 than other historic buildings and became a key location for art treasures, holding the contents of the famed Grünes Gewölbe, or “Green Vault,” among others.