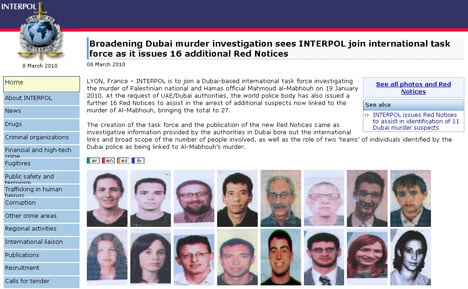 “He was arrested in Warsaw and is suspected of being involved in illegally obtaining a (German) passport,” a spokesman for German federal prosecution said, confirming a report in German magazine Der Spiegel. “It’s now up to the Poles to decide if they are going to hand him over to Germany.”

According to an article to be published Monday in Der Spiegel, the suspect identified as Uri Brodsky was arrested early June on arrival at Warsaw’s airport on suspicions that he helped a member of the hit squad get a German passport in June 2009.

Mahmud al-Mabhuh, a founder of the military wing of the Islamist Hamas movement which controls Gaza, was found dead in his room in the Al Bustan Rotana hotel near Dubai airport on January 20.

Dubai police have released extensive surveillance camera footage they say shows the team of suspects from the hit squad they have linked to the Mossad. The Hamas man had been drugged and then suffocated.

Twelve British, six Irish, four French, one German and three Australian passports were used by 26 people believed linked to the murder, according to Dubai police. In many cases, the documents appeared either to have been faked or obtained illegally.

The issue caused a diplomatic row in which the five countries whose passports were used called in Israeli envoys for talks.