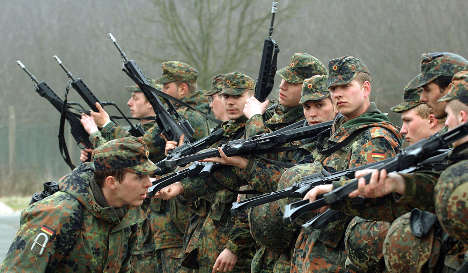 The opposing sides in the battle over compulsory military service had been preparing for a protracted campaign, with Christian Democrats Volker Kauder and Kristina Schröder speaking out in favour of keeping the duty.

The Free Democratic Party, on the other hand, has called for Defence Minister Karl-Theodor zu Guttenberg, from the Christian Social Union, to make a swift decision to get rid of it.

Yet before the two sides had time to inflict any real damage on each other, it emerged on Saturday that the Defence Ministry has already started planning to live without any new soldiers.

Seemingly ignoring the promise of Guttenberg that he would review military service policy with an open mind, Inspector General Volker Wieker told the different sections of the military to plan operations with 150,000 soldiers.

The Frankfurter Rundschau daily reported on Saturday that Wieker told his subordinates the 40,000 soldiers which leave the services by 2014 would not be replaced – that from next year there would be no new conscripts.

The weekly magazine Focus also reported at the weekend that the Defence Ministry was planning to stop sending out call-up letters from this November, which would mean that there would be no new conscripts to swear in, in January.

This has infuriated the defenders of military service within the conservative political ranks.

“I am convinced that military service should be retained,” said Kauder, head of the Union’s parliamentary party.

He said it was a crucial instrument to bind the army and society, and criticised Guttenberg for seemingly making a rash decision.

“It is not acceptable for a decision to abolish military duty in such a sudden fashion, from Thursday to Monday.”

Added to this, he said the practical considerations of the army should take priority over savings needs.

Family Minister Schröder said the connection between the armed forces and society created by military service was important, and it should only be scrapped if necessary for defence reasons.

“Such a decision should not be made on economic grounds and justified with the need to save money,” she said. She said she was going to conduct a study to examine what such a move would mean for the system of community service offered to conscripts as an alternative to military service.

“For 55 years the Union has been the party of military service and suddenly we give that up due to a savings diktat – that cannot be,” said Ernst-Reinhard Beck, the CDU’s chairman of the parliamentary defence committee.