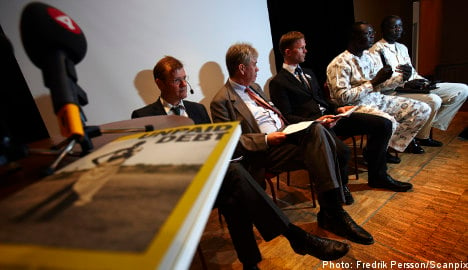 The report has now been forwarded to the Swedish international prosecutor’s office and prosecutor Magnus Elving plans to request staff from the National Swedish Criminal Investigation Department, according to the Polistidningen news website.

“There is a clear indication that there will be an investigation in Sudan regarding the crimes described in the report. In which case it would concern investigations against certain individuals, but I do not want to get ahead of myself,” Elving told Polistidningen.

The firm, which was sold to Talisman Energy in 2001, with residual operations becoming Lundin Petroleum, has rejected the allegations forwarded in the report by a group of NGOs presented on Tuesday.

“There is no new evidence in this report. The report repeats the conclusions, innuendo and false allegations based on partisan and misleading information that was rejected during that time in a document entitled ‘Lundin Oil in Sudan, May 2001.'”

The claims centre around the period between 1997 and 2003 when ten thousand people were killed and nearly 200,000 were forced to flee to southern Sudan.

The report is framed by an umbrella group named the European Coalition on Oil in Sudan (ECOS) argues that Sudanese troops, in collaboration with militias, attacked and drove away the civilian population in areas where companies could drill for oil.

Sweden’s foreign minister Carl Bildt has said through his press secretary Irena Busic that he would welcome a court trial of the allegations, according to Polistidningen.

In a comment responding to Ian Lundin’s open letter to shareholders ECOS on Wednesday insisted that the report contained new allegations pertaining to developments in the war after 2001.

The group argue that 12,000 people and 500,000 cattle died in the vicinity of concession block 5a during this time and that the consortium, which was led by Malaysian firm Petronas, employed a former colonel in the Sudanese armed forces to head their security operation.

Lundin Petroleum sold its stake in block 5A in April 2003 to Petronas after having conducted a series of drilling but before any oil was extracted and prior to the signing of a comprehensive peace deal ending Sudan’s long civil war.

The conflict, between the Muslim north and Christian south, first broke out in 1955 and continued until 2005 and is reported to have displaced 4 million southerners and claimed a total of 1.1 million lives.