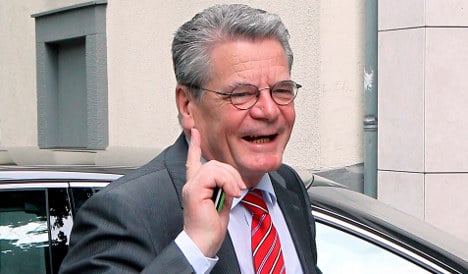 If Germans were able to elect their ceremonial head of state directly, 42 percent would pick former East German dissident Gauck, compared with 32 percent for Lower Saxony premier Wulff, who as the government’s choice is considered the frontrunner.

The poll of 1,000 voters was taken on Monday by the surveying firm the Forsa institute for Stern magazine.

But Germany’s new president will be chosen by the Federal Assembly, which is made up of the lower house of parliament and representatives from Germany’s 16 states, on June 30. The race was sparked by the abrupt resignation last week of Horst Köhler as the country’s head of state.

A comparison with an earlier poll suggests that Gauck’s support is strengthening. A survey taken last Friday by the firm Emnid had Wullf in the lead on 41 percent against Gauck’s 32 percent.

Neither poll, however, takes into account the addition of the socialist Left’s party’s candidate, former television journalist and now MP Lukrezia Jochimsen, who entered the race on Tuesday.

Gauck won the backing of 58 percent of centre-left Social Democrats voters and 75 percent of environmentalist Greens voters – the two parties who have put him up as their candidate.

Although Wulff remains the favourite, some government politicians, particularly from the FDP, have publicly come out in support of Gauck.