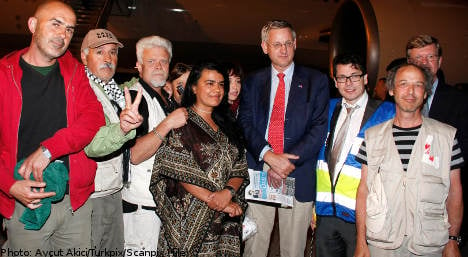 The Swedish parliament held a debate on the Ship to Gaza convoy on Monday at the request of the opposition Left Party. During the debate Carl Bildt reiterated that the Israeli attack on the convoy was in violation of international law and should thus be subject to an investigation conducted by the international community.

“The fact that Israel needs to investigate the incident itself is understandable, but it is not enough. It happened in international waters and it is thus necessary that the investigation is undertaken within a framework involving the UN,” said Bildt.

“It is becoming increasingly apparent that condemnation alone is not enough, those responsible for this carnage must be brought to justice,” he said.

“Swedish military cooperation with Israel must be ended; each year our tax revenues are placed in the Israeli war machine. Why is this allowed to continue?” Linde asked.

Urban Ahlin of the opposition Social Democrats argued that a boycott of Israeli goods from the occupied areas would be an appropriate course of action.

But Carl Bildt rejected all demands for a boycott of Israel and for Sweden to call home its military attaché.

“Politics must rise above the petty,” said Bildt and summarized the debate in that the opposition gave a clear indication that they are in agreement on one thing – to call home the military attaché.

“And they are also in agreement that it would not make an ounce of difference. Good morning! Get Serious! Foreign policy is no play house,” said Bildt.

He stressed that the breadth of the international reaction could however have an impact on Israel.

“Israel has been hit by a massive diplomatic backlash. Let’s not stand outside of this by acting alone,” he said.

The Liberal Party’s Fredrik Malm pointed out that the reason behind Israel’s blockade of Gaza is the ongoing Hamas attacks on Israel.

“I note that no one mentions Hamas, whose totalitarian and theocratic rule does not strive for democracy or peace with Israel, we must support the moderate and democratic forces. The problem is that the main organizer behind Ship to Gaza is closely allied with Hamas,” Malm said.