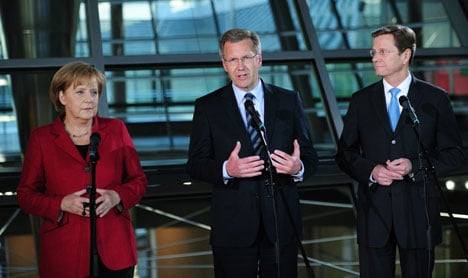 Wulff, a member of Merkel’s conservative Christian Democratic Union, is all but certain to fill the shoes of Horst Köhler, who resigned unexpectedly on Monday as the country’s largely ceremonial head of state.

“I am very grateful for the trust … I believe I can bring people together and do something for the cohesion of our society and provide courage and optimism in difficult times,” Wulff said in Berlin flanked by Merkel and the leaders of her coalition government, Guido Westerwelle and Horst Seehofer.

“Of course I’m somewhat saddened that Horst Köhler stepped down,” the 50-year-old said. “My entire efforts will be to serve the country and its people.”

Merkel said she was confident Wulff had the right character to become a great president.

“I’m very pleased Christian Wulff is prepared to take on this office,” she said. “I believe he will make a wonderful future president.”

Some conservatives and Free Democrats reportedly objected to von der Leyen’s appointment while others were concerned it would be difficult to find a suitable replacement for the key portfolio of labour and social affairs.

Wulff will now face a vote on June 30 in the Federal Assembly, which is made up of the lower house of parliament and representatives from Germany’s 16 states. Merkel’s centre-right alliance of conservatives and Westerwelle’s Free Democrats holds a solid majority in the body, ensuring Wulff will beat the candidate of the centre-left Social Democrats (SPD) and Greens, Joachim Gauck.

SPD party leader Sigmar Gabriel criticised the government’s decision not to nominate a candidate with appeal beyond party lines.

Gauck, a pastor from Rostock who played a part in the peaceful revolution in East Germany, is widely respected across the political spectrum. The 70-year-old also headed the government agency charged with sifting through the extensive files of the communist country’s infamous secret police, the Stasi.