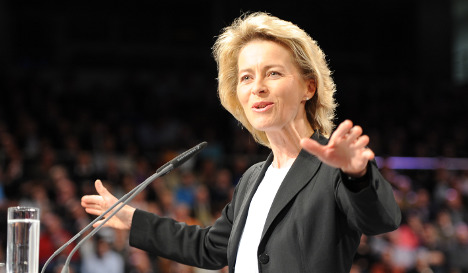 News magazine Der Spiegel quoted one source as saying her candidacy was ”firming up.”

However, Merkel still needed to win the support of coalition partners the Free Democrats, who have their own favoured candidates.

Köhler resigned abruptly on Monday, in response to criticism of comments he made suggesting Germany’s involvement in the war in Afghanistan was partly driven by economic motives.

Von der Leyen, a 51-year-old mother of seven, is widely regarded as a families-oriented politician, defending for instance a more generous welfare system and crusading against child pornography on the internet.

As a potential president, she has won support elsewhere. Gerd Langguth, a former Christian Democrats MP and biographer of both Merkel and Köhler, said von der Leyen had the right qualities for the job.

“She could carry out the duties of the office with a particular human warmth,” he told the Passauer Neue Presse.

With her family-oriented policies, von der Leyen was a “classically conservative politician,” he told the Mitteldeutsche Zeitung.

She also had a strong ability to engage with people, which made her a good choice, he added.

Asked on Tuesday for her own view, von der Leyen told broadcaster ZDF that, despite all the speculation, Germany needed to focus on finding the right solution and it was therefore improper to talk about it.