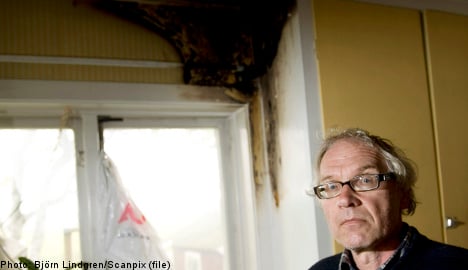 The university’s Department of Philosophy has asked Vilks to return to complete his lecture provided that the university’s security personnel, in consultation with the police, believes that it can take place in an orderly manner.

“It is a wise decision by the department,” Rector Anders Hallberg said in a statement. “It is obvious that he may complete his lecture.”

At the lecture, Vilks showed a movie with naked gay men wearing masks representing the prophet Muhammad. Three people were arrested, but released after the attack under investigation by police.

“Violence and intimidation will not silence people at the university or elsewhere in society,” the Department of Philosophy’s director of studies Rysiek Sliwinski said in a statement.

The lecture on freedom of expression and art will be held in the fall provided that it can take place in an orderly manner. The location, time and format have not yet been determined. A new safety assessment will be made in consultation with the police.

Following the attack at the lecture, Vilks’ house in the village of Nyhamnsläge in southern Sweden was attacked with gasoline-filled plastic bottles. A window in the house was smashed and a curtain was set on fire.

The artist’s personal website was also hacked, with an Islamic group calling itself Al Qataari claiming responsibility for the attack.

Vilks courted global attention in 2007 when the Swedish regional daily Nerikes Allehanda published his satirical cartoon depicting Muhammad as a dog to illustrate an editorial on the importance of freedom of expression.

The cartoon prompted protests by Muslims in the town of Örebro in central Sweden, where the newspaper is based, while Egypt, Iran and Pakistan made formal complaints.

An Al-Qaeda front organisation then offered $100,000 to anyone who murdered Vilks – with an extra $50,000 if his throat was slit – and $50,000 for the death of Nerikes Allehanda editor-in-chief Ulf Johansson.

The protests in Sweden echoed the uproar in Denmark caused by the publication in September 2005 of 12 drawings focused on Islam, including one showing the prophet Muhammad with a turban in the shape of a bomb.

In March, American citizen Colleen LaRose, who called herself “JihadJane” in a YouTube video, was charged by US authorities with conspiring to kill Vilks after seven suspected co-plotters were arrested in Ireland.