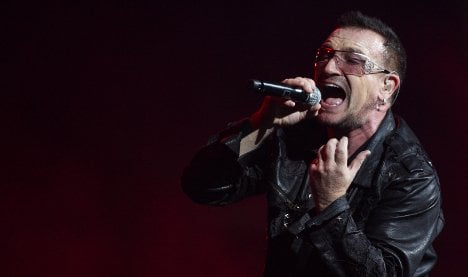 “Bono has now been discharged from Ludwig Maximilians-University Hospital in Munich where he underwent emergency surgery on Friday, following a back injury,” the Irish band said on its website.

“This surgery was the only course of treatment for full recovery and to avoid further paralysis,” the site quoted the doctor who performed the operation, Jörg-Christian Tonn, as saying.

Bono, who celebrated his 50th birthday in New York earlier this month, was admitted to a specialist neurosurgery unit last week after injuring himself during tour preparation training in Germany.

The singer was suffering from severe compression of the sciatic nerve, a serious tear in the ligament and a herniated disc, doctors said. He is to start a rehabilitation program and will need at least eight weeks to recuperate.

U2 tour promoter Arthur Fogel said 16 North American shows planned this year, from Salt Lake City on June 3 to New Jersey on July 19, had been called off and would be rescheduled for 2011.

“Although we understand the disappointment to U2 fans, first and foremost comes the recovery of Bono,” Fogel said.

The website also quoted the singer as telling the head of next month’s Glastonbury Festival in England that the band, which was scheduled to headline the event, would have to bow out.

“I’m heartbroken,” Bono said. “We really wanted to be there to do something really special – we even wrote a song especially for the Festival.”

U2 had said Friday that it delayed the second leg of their 360 Degrees world tour, scheduled to start with the Salt Lake City gig, due to Bono’s surgery.

But the following date on June 6 in Anaheim, California, appeared to be going ahead as planned.

Tonn said Bono was referred to him late last week with a “sudden onset disease.”

“He was already in severe pain with partial paralysis in the lower leg. The ligament surrounding the disc had an eight-millimetre tear and during surgery we discovered fragments of the disc had travelled into the spinal canal,” he said.

“Bono is now much better…. The prognosis is excellent but to obtain a sustainable result, he must now enter a period of rehabilitation.”

Another of his doctors, Hans-Wilhelm Müller-Wohlfahrt, who also treats the German national football team, said the rehabilitation programme would start gradually and increase in intensity over the next two months.

surgery has gone very well, the coming weeks are crucial for a return to full

health,” the orthopaedist was quoted on the website as saying.