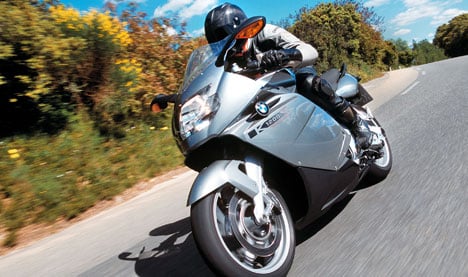 A BMW spokesman said the company had uncovered a risk of leaks in the braking systems of its K 1200 GT motorcycles and other models built on the same base. The recall concerns motorcycles built between August 2006 and May 2009, some of which have already been checked.

“Over time, it emerged that even corrected braking systems did not resolve the problem 100 percent,” he said.

Vibration generated by the motorcycle’s operation were found to cause leaks that affected the front brake, the company said, while rear brakes continued to function normally.

BMW has not heard of accidents linked to the problem but “would gladly have foregone having to make another recall,” the spokesman said.

The group is the leading manufacturer of luxury cars in the world and also sold 87,306 of its upmarket motorcycles last year.

That is only a fraction of the 1.29 million automobiles delivered in 2009 however, and shares in the group did not suffer from the announcement, gaining 2.42 percent to €39.65 on a firmer Frankfurt stock exchange. The DAX index of German blue-chips closed up 1.47 percent.

The auto industry has been hit by several major recalls this year, with the world’s biggest carmaker, Toyota, hit by several technical problems that forced it to recall around 10 million vehicles, mostly in the United States.

Among German automakers, Volkswagen recalled nearly 200,000 vehicles in Brazil in February, while Porsche asked owners of its new Panamera model to bring them back into the shop for seatbelt checks.

US car giant General Motors has had hood problems with more than 160,000 all-terrain Hummers and Nissan of Japan has recalled more than 134,000 cars sold under its luxury brand Infiniti in the US to fix airbags.

Honda’s luxury division Acura has said a power steering hose on some 167,000 TSX models should be replaced to avoid a “smoke or a fire” hazard.