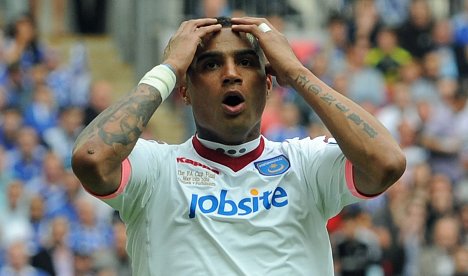 Ballack was ruled out of the 2010 World Cup finals Monday after a scan revealed torn ligaments in his ankle following a heavy tackle by Germany-born Ghanaian Boateng during Sunday’s FA Cup final win.

The 33-year-old German will be sidelined for eight weeks, thus ending his hopes of playing what was likely to have been his last World Cup campaign in South Africa. Ironically, Ghana are in Germany’s Group D at the World Cup.

For the German’s lawyer, Michael Becker, Boateng set out to injure Ballack intentionally.

“To me, what Boateng did was not simply an insidious tackle but was designed to intentionally injure,” Becker said. “We are now looking into all of our legal options, which could lead to both civil and penal consequences.”

Ballack’s injury and subsequent absence from the June 11-July 11 finals caused uproar in Germany, although Boateng said Monday he did not set out to injure Ballack.

“I was late and I tackled him head on, it was really stupid. I apologised to him twice on the pitch, and now this makes it three times,” he said. “I am really sorry, but there was no ill-intention meant.”

Ballack meanwhile indicated he wanted to forget the whole incident.

Speaking from his team’s training camp in Sicily, to which he travelled despite his injury, Ballack said: “Obviously I’m still very angry and disappointed, but there’s no point in going out to make things worse.”