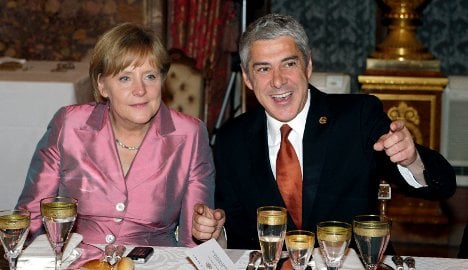 But will Jose still be smiling if Angie doesn't get the cheque? Photo: DPA

In an interview with major newspapers in France, Spain and Italy, Merkel said: “Joining the eurozone isn’t about creating a union made up of financial transfers.”

Merkel’s warning came as she faced strong domestic opposition to Germany’s participation in the IMF-led bail-out of debt-ridden Greece and the creation of the eurozone’s trillion-euro emergency stabilisation fund.

European leaders have tried to sell both measures to voters as essential tools to protect national economies from speculative attacks and reassure banks that eurozone states will not default on their debts.

But there is resentment in relatively wealthy states such as Germany that strugglers such as Greece and eventually Portugal or Spain might get bailouts after years of overspending on generous welfare and pension systems.

Merkel told the French daily Le Monde, Spain’s El Pais and Italy’s Corriere della Sera that Germany believes “solidarity and solidity are inseparable” in the eurozone single-currency bloc. “For Germany, this culture of stability and solidity is not negotiable.”

Germany has been pushing for its fellow eurozone members to adopt rigorous public spending to cut deficits, halt the slide of the euro and stabilise financial markets spooked by the fear of sovereign debt defaults.

Press reports say Germany could demand a European version of its own constitutional “debt brake,” which puts a legal limit on public deficits.

The eurozone was founded on treaty-based commitments to run national economies as a matter of common interest, by means of national controls on public finances and policies to achieve convergence.

The term “transfer union” is used broadly to mean a politically different cooperative pooling of resources so that funds flow via a common fund, or under an automatic system, from stronger countries to weaker countries, much as occurs within countries between strong and weak regions.