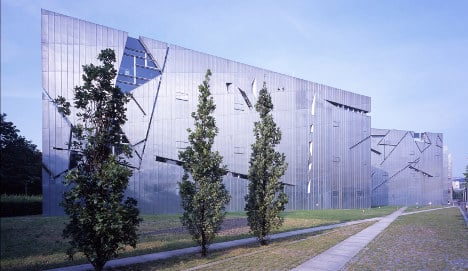 Since opening in 2001 in central Berlin, the museum has attracted more than six million people from all over the world, with 750,000 visiting in 2009 alone.

In the same period the number of education projects organised by the museum has more than doubled, with thousands of school groups visiting every year in addition to hundreds of educational events taking place.

Together with its growing archive and library holdings, this has resulted in an “acute” lack of space, the museum said.

The extension, opposite the current site on Lindenstrasse, will be “one of the most important research and education centres on the history and culture of German-speaking Jewry,” it said.

Click here for a photo gallery of the extension.

The Jewish Museum at present consists of two buildings, the Kollegienhaus, a former Baroque Prussian courthouse, and a striking, zigzag metal construction designed by Libeskind, connected by underground passageways.

For the €10-million ($12.7-million) extension, the 63-year-old will convert a large warehouse currently housing a flower market, adding three cubes, one for the entrance, one for a library and a third for an auditorium.

The museum tells the story of 2,000 years of Jewish history in Germany, with special focus on the murder of six million Jews by the Nazis, including through the poignant use of empty space.