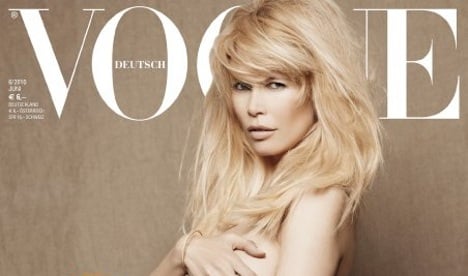 It is the 13th time the 39-year-old Schiffer has made the cover of German Vogue over the past two decades, and this issue will look back at her impressive career. Titled “Claudia by Vogue,” the magazine features images by star photographers including Ellen von Unwerth and Francesco Carrozzini.

“There are probably few other women who have been photographed as often as Claudia,” said German Vogue Editor-in-Chief Christiane Arp in a statement released on Tuesday. “But so many different sides to her have never been shown before.”

Though she has never before stripped off her kit while preggers, it is not the first time Schiffer has gotten naked for Vogue. In 2008, she took off her clothes for the cover of the magazine’s special issue on sex.

“It’s not that I’m against nudity,” she said at the time. “I’m German, I’m very open, in Germany they lie in the park naked. It’s just the principle.”

Schiffer rose to prominence in the 1990s after being discovered in a disco in the northern German city of Düsseldorf at 17-years-old. Her reign lasted through the decade, and she dabbled in acting before marrying film producer Matthew Vaughn in 2002. The couple has two children, born in 2003 and 2004.