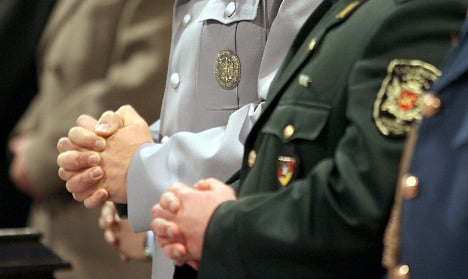 “I have never had a bad experience,” 31-year-old Muslim soldier Arif Ünal told the paper.

However, he added that he must plan his prayer times around the military’s schedule and sometimes only eat vegetables at the canteen to avoid pork, which is forbidden by Islam.

Those who join the German military are not required to indicate their religion, but the state ensures that soldiers have a right to practice their faith while serving. Still, there are no prayer rooms or chaplains available to non-Christians.

“Theologically nothing speaks against giving Muslims a chaplain too,” Werner Weinholt, assistant to military Bishop Martin Dutzmann, told the paper.

But current rules state that there must be at least 1,500 members of a faith on the force before the Bundeswehr is obligated to create a corresponding position. Another reason for the military’s failure to provide religious guidance for Muslims is the a lack of an official organisation to advocate on their behalf, the paper said.

Meanwhile the French army plans to increase its existing staff of Imams to 40 this year, and the Austrian army has employed two to see after its 800 Muslim troops.

The Bundeswehr’s religious centre (ZInFü), however, is still trying to catch up to the reality of the ranks. For about a year the organisation has been working on a programme to build “intercultural competence,” the paper said. Their first pilot seminar is scheduled for May 17.