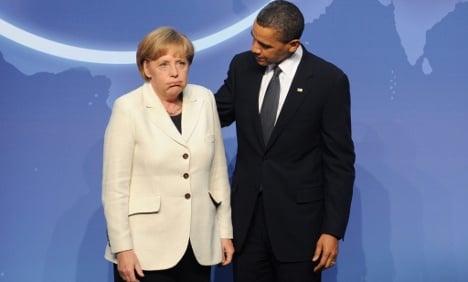 “The measures send a clear signal that the markets can rely on the financial stability of the euro area and that speculating against the eurozone doesn’t pay,” deputy government spokesman Christoph Steegmans told a regular briefing.

Berlin is expected to provide at least €123 billion ($157 billion), but officials have warned that Germany’s slice is likely to be higher – up to €150 billion – because countries for which the fund is designed will not be contributing.

The fund – the eurozone stabilisation mechanism – which was unveiled in the early hours of Monday after marathon talks in Brussels, has been dubbed “Shock and Awe” for its size and it was immediately cheered by markets.

But the New York Times reported on Tuesday that it took a phone call from Obama to convince Merkel that dramatic action was required. He stressed in the conversation late on Sunday that without “an overwhelming financial rescue” the future of the euro and the entire European Union was at stake.

“He was trying to convey that he knew these were politically difficult steps that the leaders there had to take, that he had gone through them as well,” one senior US administration official familiar with the call to Merkel told the Times. “And that, from his experience, trying to get out ahead as much as possible was the right way to go.”

Merkel has faced criticism both at home and abroad in recent weeks for apparently dithering on the bailout of Greece, possibly aggravating the chaos on the financial markets the new EU rescue package intends to quell.

The unprecedented intervention worth more than €750 billion was backed by the International Monetary Fund and central banks worldwide, and Merkel said on Monday that the package would “strengthen and protect the common currency.”

But following the unpopular Greek bailout, for which Germany is stumping up €22.4 billion over three years, this latest dip into the coffers provoked outrage in some quarters.

The populist daily Bild screamed on its front page: “Yet again, we are

the idiots of Europe.”

“Germany is providing the lion’s share of the loans. If they are not paid back, it is the taxpayer who will have to fork out,” the paper added.

Also provoking anger was the fact that the cabinet’s decision came a day after Merkel announced there was no money for tax cuts and any relief would come only after 2012.

“It’s unbelievable. With a gigantic €750 billion, the EU and the IMF want to save the euro. Germany’s contribution alone for our bankrupt neighbours is €123 billion. Yet there is no money for us to cut taxes,” said Bild.

Broadsheets were also sceptical about the package, with right-wing daily Die Welt saying: “All that has been won is a little time – how much is unclear at present.”

Berlin’s participation in the EU rescue package requires parliamentary approval, and the first reading of the draft law is scheduled at the next regular week-long session.